Theatre organs are, generally speaking, ‘totally enclosed’, meaning that all the tone producing parts of the instrument (pipes, percussions etc.) are placed in rooms (referred to as ‘chambers’) and out of sight of the audience.

Chamber positioning and shape critically affects the way the instrument sounds in the building; there are various options and while no one is best, there are particular advantages to each. Organ chambers were often included as an apparent afterthought by the theatre architects, and organ builders often arrived on site to be greeted by hideously contorted spaces in which to install their masterpieces. In a valiant attempt to inform architects of their requirements, Christies produced some excellent drawings of suggested layouts which are reproduced below. 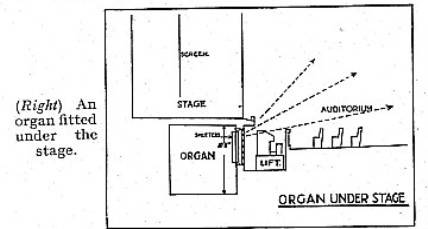 The chambers are laid out side-by-side under the stage. The shutters, usually of modest height, allow the sound to reach the auditorium via the orchestra pit. The blower/relay room may (conveniently) be placed centrally between the chambers if the orchestra pit width is sufficient. Understage chambers vary in their success and seem to depend on quite subtle differences in their design as well as on the depth of the pit itself. 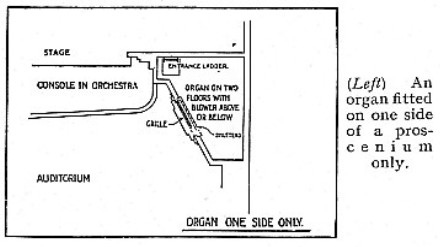 The chambers are placed (side-by-side or one over the other) to one side or another of the proscenium arch. Sound reaching the audience is biased to the left or right, but these layouts are often reasonably successful in reaching all parts of the auditorium. Because the splay walls are usually at an angle to the side walls of the theatres, the chambers often assume rather strange wedge-shaped floor plans. 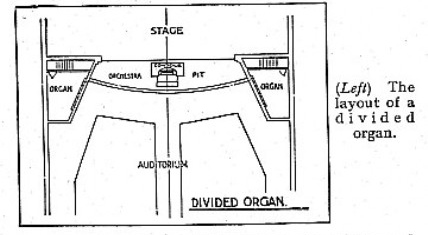 The chambers are placed on on each side of the proscenium splay walls. Dividing even quite a small organ can have a dramatic audible impact on the audience. For some reason (perhaps associated with the cost of running a wind line and cables to each chamber), the idea was not often adopted in Great Britain, although frequently used in the United States. 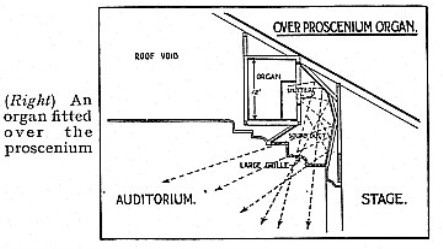 The chambers are placed over the stage, the sound reaching the audience via a tone chute, perhaps being reflected backwards in order to reach the auditorium via a grille over the proscenium. Whilst careful design is needed to avoid undue loss of sound, good examples which project well into the auditorium have a warmth and breadth of sound that challenges even modern cinema audio systems.