Control the sounds made when keys or pedal notes are pressed. On a theatre organ are generally in the form of stop-keys; on classical (straight) organs may be in the form of rocking tablets or the traditional stop-knobs that move in or out. 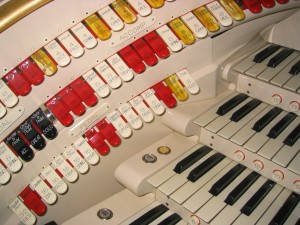 The layout of theatre organ stop-keys in a giant semi-circle gives rise to the term “horseshoe console”. This ergonomic design was intended to improve access to the large number of stop-keys by the organist.

A further ergonomic feature is the colour-coding of stopkeys. At its simplest, flue stops are coloured white/ivory, reed stops coloured red and couplers coloured black. Certain organbuilders embellished this scheme; Wurlitzers for example coloured the celeste tabs a mottled yellow, whilst Christies (especially in the early days) employed an elaborate scheme including white, black, red, brown, blue, yellow and orange. To be effective, any such scheme has to be legible under a powerful spotlight.

A large organ may have fifty or more stop-keys to a single manual. To make control of these easier, a combination action system is usually provided which allows the organist to memorise specific combinations of stops and recall these at the press of a button (or ‘piston’).